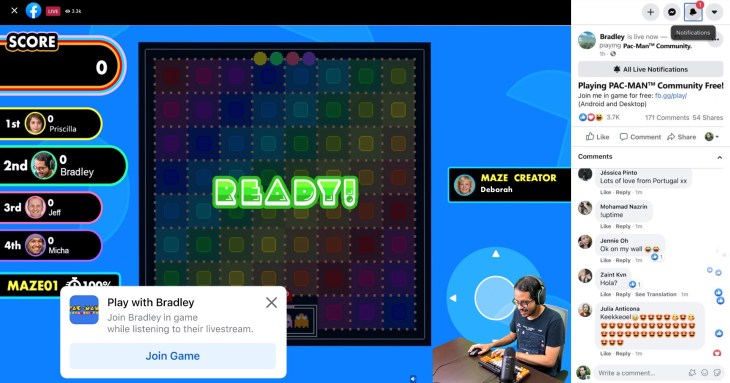 Facebook is trying out a new layer of interactivity the company is calling “play with streamer” that lets viewers hop into game streams with their favorite streaming personalities. The company is highlighting the feature with the launch of Pac-Man Community, a version of the classic that adds modern touches like multiplayer, user-generated mazes and viewer interactivity aiming to capture a bit of the magic of something like Twitch Plays Pokemon.

For games with the feature enabled, viewers can click a button to open the game directly and join in multiplayer mode. The game selection is very small for now, limited to the new Pac-Man game and Worlds FRVR, a Minecraft clone that quietly introduced the functionality in August.

Streamers have control over who gets the privilege and can dole it out as a perk to their most dedicated supporters, a key tool for creators building and connecting with gaming-based communities.

To make itself attractive as a hub friendly to emerging streamers, Facebook Gaming currently gives 100 percent of revenue to creators, but if that deal sounds too good to be true, it is: the offer expires in 2022.

In October, Facebook added a co-streaming feature to let creators collaborate with one another and stream simultaneously. It’s a feature that Twitch has had since back in 2019 in the form of “Squad Stream” and a necessary one for building a vibrant streaming ecosystem.

Since the dawn of FarmVille, Facebook has hosted a stable of casual games that share little in common with Twitch’s most popular titles. While Facebook Gaming highlights streams from games like Fortnite and Call of Duty too, the company’s emphasis on mobile-friendly HTML5 games could lend the platform unique appeal beyond hardcore gamers. As streaming becomes even more mainstream, that could attract first-time viewers who probably wouldn’t find themselves on Twitch.